Position of E a F houses 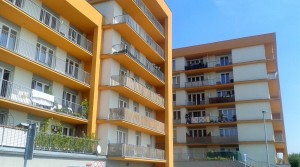 Prague 13 is situated in the southwest of the capital. It is considered as a part of Prague 5. Most of the local sixty thousand inhabitants live in block of flats called Southwest city which includes a housing estate Stodůlky, Luziny Butovice and large corral. Furthermore   Prague 13 includes a portion JINONICE Řeporyje and Třebonice. The city center is easily reached by Metro Yellow Line B, which has stops at several stations. An escape into the countryside offers Dalejske Prokop Valley.